NEW ORLEANS, La. (March 8, 2018) – Rick D. Wilkerson, DO is the recipient of the American Academy of Orthopaedic Surgeons (AAOS) 2018 Humanitarian Award. Dr. Wilkerson was honored at the Academy’s 2018 Annual Meeting for his nearly three decades of work serving underserved populations around the globe.

The Humanitarian Award recognizes living fellows, international and emeritus members of the Academy who have distinguished themselves through outstanding musculoskeletal-related humanitarian activities in the United States or abroad. 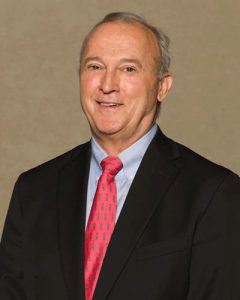 Dr. Wilkerson lives in Spencer, Iowa, with his wife Barbara and nine children. Early in his career, he chose to practice in a rural area of Iowa as a result of a suggestion by Barbara that he practice in an area that needed him, not one that he needed.

“The life of Rick Wilkerson and his family is lived quietly, but with pronounced distinction,” said David Barber, one of Dr. Wilkerson’s classmates from West Point. “Together, they bring a message of real and lasting peace to many international homelands by passionately focusing on dispensing healing directly to the households of people in underdeveloped nations.”

In addition to being a skilled orthopaedic surgeon, Dr. Wilkerson is passionate about helping countries develop and improve their orthopaedic capabilities, and he knew that with his experience, resources, and determination he could make an enormous impact on peoples’ lives.

His global humanitarian pursuits have taken him to more than 14 countries such as Haiti, Iraq, Vietnam, Afghanistan, Pakistan, Libya and Uganda. His colleagues credit his West Point education and military medical experience as a key factor for the special instincts and skill set required to thrive in environments of war, hostile governments or natural disasters.

Dr. Wilkerson has been greatly involved with Health Volunteers Oversees (HVO) and the International Medical Corps. Among his many accomplishments, Dr. Wilkerson has made annual trips to Iraq, initiating a total knee replacement (TKA) program for Iraqi residents, leading to more than 1,500 TKAs performed. He also sponsored eight Iraqi orthopaedic surgeons in his private practice for postgraduate training. During their time in the U.S., these surgeons lived with Dr. Wilkerson and his family. As a result of his commitment, Dr. Wilkerson was named honorary professor of orthopaedic surgery at the University of Basrah in Iraq.

Dr. Wilkerson’s humanitarian efforts abroad resulted in more than just disseminating orthopaedic knowledge and access to care. In addition to their five biological children, Dr. Wilkerson and his wife have adopted four children. On a trip to Cambodia in 1996, Dr. Wilkerson adopted a baby boy, Daniel, who was left on a doorstep with a note as a newborn. His daughters, Breanna and Kate, were sisters caught up in the Iowa foster care system. He and Barbara adopted both to keep them together. In 2010, Dr. Wilkerson spent three weeks in earthquake-stricken Haiti to provide aid. It was there that he met a newly-orphaned Haitian boy, Junior, who was soon thereafter adopted by the family.

Dr. Wilkerson recalls that some of his most memorable experiences were when his family traveled with him. This includes a trip to Kampala, Uganda where Barbara, a pediatric nurse practitioner, developed the pediatric intensive care unit’s standard operating procedures for provision of oxygen for patients in the pediatric ward at Mulago Hospital. Additionally, his children created a playroom in the pediatric ward.

Based on his experience in Haiti, Dr. Wilkerson and Barbara established a non-profit organization, Love Takes Root (LTR), in 2011 with a mission to cultivate the welfare of children worldwide. Since its formation, they have purchased over three acres of land in Jacmel, Haiti, built boys’ and girls’ cottages, a staff house, a dining room/kitchen, a primary and secondary school for more than 400 students, a computer lab and a medical clinic.

The philosophy behind LTR is reflected in its support of a mentoring project so that it becomes self-sustaining within five years, by teaching Haitians management skills. Dr. Wilkerson notes, “We now have orphanage staff, teaching staff and clinic staff on their way to self-sustainability instead of dependence on charity.”

Dr. Wilkerson has been a long-time, active member of the AAOS, serving on the editorial board of orthoinfo.org for nearly 15 years and the Board of Councilors for six years. He has also been an oral examiner for the ABOS for years.

“Receiving the AAOS Humanitarian Award is an incredible honor, especially given the caliber of all the previous award recipients, many of whom I’ve known and worked with,” said Dr. Wilkerson. “It means so much that my peers took the time to nominate me.”