LAS VEGAS (March 14, 2019)—X. Sherry Liu, Ph.D., was presented with the Kappa Delta Young Investigator Award at the 2019 Annual Meeting of the American Academy of Orthopaedic Surgeons (AAOS) for her research into how a woman’s reproductive history is a key factor for osteoporosis and fracture risk due to estrogen deficiency. The Kappa Delta Awards recognize scientists whose research in musculoskeletal disease or injury have led to advancement in patient treatment and care. 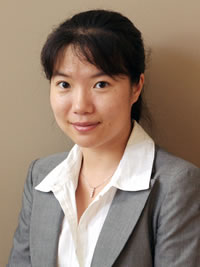 Reproduction and menopause are two physiological events that cause alterations to the female skeleton due to rapid estrogen withdrawal. On average, the female skeleton loses five to 10 percent of their bone mineral density during pregnancy and lactation. The reproductive process requires substantial quantities of calcium for both the growing fetus, which needs 60 to 350 mg of calcium per day (depending on the gestational stage), and the breastfeeding infant who needs an average of 200 mg per day to support healthy bone growth. The female body is able to meet the increased calcium demand through several mechanisms, one of which is skeletal resorption.

To learn more about the short and long-term effects on bone structure in women who reproduce and lactate, and those who don’t, Dr. Liu and her team studied rats to observe their hormone changes and how their bone structure responds to estrogen deficiency during reproduction and post menopause.

Initially, the research showed that after two to three reproductive cycles in rats, the trabecular bone (spongy substance inside the bone) and the cortical bone cannot repair itself back to those of virgin rats. However, the bones of reproductive rats undergo a transformation post weaning as the cortical bone (hard outside surface) becomes stronger to compensate for the loss of the trabecular bone, reducing fracture risk.

“The human body is very smart,” said Dr. Liu. “When there is a huge demand of calcium, the fastest and most efficient way to get it is by resorption, and we found that the bones of reproductive rats prepare for this by shifting its structure to overcome weakness.”

While women who reproduce and lactate experience initial loss in bone structure, there are long-term benefits after menopause. Dr. Liu’s research showed that under a simulated post-menopausal condition (equivalent to 10 years post menopause in human), the reproductive rats had stronger bone structure than the virgin rats and they maintain their bone health more efficiently by load-bearing activities such as resistance and weight training.

“Our hope is that this research leads to a deeper biological understanding between women who have children and those who don’t, when considering how you prevent, diagnosis, manage and treat osteoporosis,” said Dr. Liu.

Dr. Liu is an associate professor in the Department of Orthopaedic Surgery and Bioengineering at the University of Pennsylvania, and is the director of the microCT Imaging Core of Penn Center for Musculoskeletal Disorders. Dr. Liu received a bachelor’s in Electrical Engineering from Tsinghua University, Beijing, China. In 2007, she received her Ph.D. in Biomedical Engineering from Columbia University and then continued her post doctorate training in the Endocrinology Division at Columbia University Medical Center.